The Columbia Memorial Space Center is partnering with Long Beach Comic Con for Space Expo 2015, an innovative and one-of-a-kind program that will connect comic book convention attendees directly with the world of scientific discovery. Space Expo 2015 will be held at the Long Beach Convention Center as part of Long Beach Comic Con on September 12 and 13, 2015 with panels featuring top aerospace industry notables discussing hot button scientific topics. As part of Space Expo 2015, there will be interactive exhibits featuring robotics, 3D printing, and even a spacesuit – all curated by Columbia Memorial Space Center, the prestigious CA-based learning center dedicated to bringing the wonder and excitement of science to audiences of all ages and backgrounds.

“Space, the space program and science are all a part of the same pop culture dialogue as comic books and science fiction,” said Columbia Memorial Space Center President Ben Dickow. “We want to create a fandom for science that will grow and support the next wave of space explorers and scientific progress–and there’s no better place to do that than at a comic convention.”

Panels at Space Expo 2015 at Long Beach Comic Con will include:

Get you new and updated SHIELD ID before Agents of SHIELD season3 begins! (my SHIELD ID, from season1, expires in Oct).
Here’s a link to this cool site that someone made with the help of Reddit:
http://www.eidbadges.com/id/shield/

The aerodynamics help them aim better.

This has been another ‘Star Wars Questions’ answered, warning, more may be coming.. 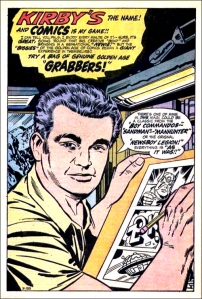 Jack Kirby is a true legend. Jack Kirby and Stan Lee created the SIlver Age of comics. many of the Marvel superheroes you know and love were created and drawn by Jack Kirby. Kirby began his career in comics at an early age at the Lincoln Newspaper Syndicate and on Popeye animated cartoons. he later worked on romance comics, specifically, ‘Young Romance,’ which sold millions of copies. Kirby produced in all genres of comics, romance, westerns, war and crime comics before discovering his niche in sci-fi / fantasy comics that mimicked the popular drive-in movie themes at the time. Kirby worked for many comic companies as staff and freelance, but when he began collaborating with writer-editor Stan Lee at Atlas, which would later become Marvel comics, the superhero resurgence, that would become the “Silver Age of Comics” commenced. their first superhero title together was ‘The Fantastic Four,’ in 1961. many titles would follow like ‘The Silver Surfer,’ ‘Hulk,’ ‘Thor,’ ‘Ironman,’ ‘X-men,’ ‘Black Panther,’ ‘Avengers,’ and many others. thank you Jack Kirby for making my childhood, and adult childhood, awesome. Happy Birthday to a great man and to an imagination that has given us a fantasy world, uplifting us for generations.

‘Borderlands,’ the hugely popular video game from Gearbox Software, is being developed into a movie by Lionsgate. none other than Avi Arad (Spider-man 1 & 2, NOT Amazing Spider-man 1&2, X-Men 1, Iron Man 1) and his son Ari Arad will be producing the film. no premiere date set.

‘Borderlands’ is like a space-western set on the planet of Pandora, which has been mined and settled by mega-corporations Atlas & Dahl with convict labor. gameplay turns treasure hunting as you collect alien artifacts needed to open an ancient alien vault.

the original ‘Borderlands’ video game has sold more than 26 million copies, has a sequel, ‘Borderlands 2’ and a “prequel,” ‘Borderlands: The Pre-Sequel,’ with an alternate gameplay game called, ‘Tales from Borderlands.’

I just want to say to everyone who trolled the internet assuming the “proper” race of Storm Troopers, well, John Boyega is not even a Storm Trooper, he is the hero AND he is a Jedi! John Boyega, “Finn” looks bad ass taking on Kylo Ren, the new Sith Lord. Rey (Daisy Ridley), featured here with droid, BB-8 is also a hero, Jedi powers yet unknown. (courtesy of LucasFilms LTD @StarWars on Instagram).

There has been an awakening… #StarWars #TheForceAwakens 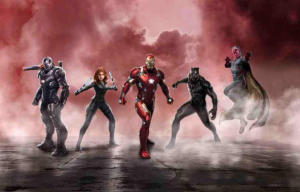 not revealed are the team allegiances of Scarlet Witch / Wanda Maximoff (Elizabeth Olsen) and Spider-man / Peter Parker (Tom Holland). perhaps they try to remain neutral until they are dragged into the fight. The Hulk / Bruce Banner (Mark Ruffalo) was cut from the script, as to where The Hulk went after ‘Avengers : Age of Ultron’ is “a big deal;” a story that can’t be told in just a few minutes. we will have to wait until ‘Avengers 3: Infinity War, part1’ for more Hulk.

Captain America : Civil War will focus on the aftermath of Avengers : Age of Ultron and the government stepping in to assess and control situations, calling the Avengers only when needed and overseeing their operations. Steve Rogers / Captain America and Tony Stark / Iron Man have disparate views on this and the Avengers’ role, which will eventually escalate to war among the Avengers with the looming threat of arch villain Baron Zemo (Daniel Bruhl) & his nefarious plans that most likely start with getting the Avengers to fight each other. also with returning villain, from Captain America The Winter Soldier, ex-S.H.I.E.L.D./Hydra agent, Crossbones / Brok Rumlow (Frank Grillo), who, in the comics, shoots and kills Captain America. don’t worry, Chris Evans has signed on for 6 movies as Captain America, leaving Avengers 3 : Infinity War, pt1 as his last contractual movie (will Captain America be killed by Thanos and Falcon carry the Shield?), but that could change, as it did for Robert Downey Jr, stating “No more Iron Man,” and then signing on for ‘Iron Man 4.’

Sandor Clegane, more commonly known as “The Hound” is NOT dead! actor Rory McCann has been spotted in Belfast at a Game of thrones season 6 filming location.

watch episode one of ‘Vixen,’ the animated web series, starring the cast of ‘Arrow’ and ‘The Flash,’ on CW’s online platform (website or app), CW Seed :

why is ‘Vixen’ an ‘Arrow’ spinoff? Vixen is brought to you by the writers and producers of ‘Arrow,’ Marc Guggenheim and Greg Berlanti, is set in the ‘Arrow’ & ‘The Flash’ universes, and even the actors of ‘The Flash’ and ‘Arrow’ voice their animated versions of the characters they play on ‘The Flash’ and ‘Arrow.’ each weekly episode of ‘Vixen’ is only 5min, in the original ‘Star Wars : Clone Wars’ style, so it will be great to binge re-watch the entire season. will Vixen make a live-appearance on Arrow?

YES! but exactly when still remains a mystery; Marc Guggenheim is good at keeping secrets. Vixen is voiced by Megalyn Echikunwoke.

Who is Vixen? Vixen is Mari Jiwe McCabe, from the fictional African nation of Zambesi. Mari McCabe was raised by the village priest, Ricard Jiwe, after her mother was killed. Later, Mari became a model, which funded her crime fighting career. 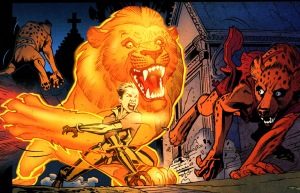 Vixen has the ability to connect with the Earth’s morphogenic field, called, “The Red,” to access and focus the power of any animal who has ever walked the earth, even focusing the power of extinct animals or more than one animal at the same time. Vixen wears an ancestral fox and tooth necklace, given to her by her mother, called the Tantu Totem, which was once thought to be the source of her power. The Tantu Totem actually helps clarify the connection to The Red, but may only be warn by those who protect the innocent. Vixen can communicate and control animals as well, but the longer she stays connected to The Red, the more she adapts the behavior of the animals she is connecting with. Vixen’s crime fighting costume includes claws which are magically enhanced that can cut through almost anything. 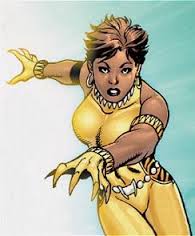