‘The Cloverfield Paradox’ is an extremely well done scifi adventure movie, with amazing VFX / CGI and special FX. BUT the plot and the story could have been so SO much better; it just felt like they added unnecessary scenes to cover up the gaps in the story and major plot holes. The worst part of this movie was the plot trying to connect the previous films in this series, ‘Cloverfield’ and ’10 Cloverfield Lane.’

‘The Cloverfield Paradox’ movie, surprised us all by dropping it on Netflix, immediately available after the Super Bowl, on the online streaming platform, skipping theatrical release. In ‘The Cloverfield Paradox,’ the time frame is set in the future to our present 2018 (mentioning this just in case someone from the future is reading this and archiving it to unravel the on-going Cloverfield Mystery). With only 5 years remaining of Earth’s oil reserve supply, a last minute, last ditch effort to save modern civilization, a particle accelerator on a massive space station is created, with the name ‘Cloverfield.’ If it really was humanity’s last chance, why did the ship have to be so big? It literally would have taken decades to build, which would present so many technological problems, including the original parts and design would have to be replaced after 10 years. The particle accelerator itself was not that big, which would be the only reason to have such a massive ship, as current particle accelerators are miles in length, (and circular). The ship design looked amazing, but the rotating elements were off-axis, which would not create the intended artificial gravity; also not necessary and adding to the size of the ship.

Perhaps “The Cloverfield Paradox” is that the use of alternative fuels would have negated the need for fossil fuels and deescalated any future “Oil Wars,” thus negating the need for this entire movie. Today, the military has prototype biofuel fighter jets that perform equally to fossil fuel jets. A biofuel commercial airline jet made its first transatlantic flight several years ago. Solar City solar panels, using Tesla batteries, powered an entire hospital last fall, as independent aid to Puerto Rico. Solar power plants already exist in the Nevada and Arizona deserts, not to mention countless wind farms around the world. I find it hard to believe, “humanity’s last hope” lies in an untested technological form of space particle accelerator energy generator, that feeds energy to the entire planet. And what was the plan to get the energy down to Earth? Beam it down like a satellite mobile phone signal? If so, would you have to wait for it to pass overhead to get power for your house or city? So many questions..

Back to the story.. and this is the worst part of this film, Donal Logue, an author, via tv broadcast, to the Cloverfield space ship bridge command center, explains the tie-ins to all the Cloverfield movies: “the particle accelerator could open a door to another dimension and bring demons or monsters to Earth.” WHAT?! Why would you take ALL the anticipation and suspense away from the entire film? Also, why were you watching television 30 seconds before testing the device, with only fuel for three more test attempts), THE most important thing in human history? Was it for your Instagram Story?

Well, now you know what’s going to happen and what will happen on Earth right after the accelerator fires up. Now it’s just wait and see as story unfolds, but wait, we’ll mislead you with scenes that distract from the main story like the arm scene didn’t need to be there. Unless Hamilton was going to use the arm to kill Mena at the climax of their fight scene; they even showed a close-up of the arm, eluding to it being used later in the fight scene, but it never was. Or, unless they were trying to say that that area in the ship was where the dimensions overlapped, but if so, there should have been more anomalies in that same area, like every anomaly, including the unexplained lake of water that appeared out of no where. If they were trying to say that “condensation” created the lake, then the weight of the mystery water would have thrown the station off balance long before the explosion of the magnetic/oxygen related  incident at the rotating gravity balancer. This magnetic anomaly would have made perfect sense if it was in the same location. The purpose of the oxygen scene was to get more energy to launch the particle accelerator, and was going to give them “just enough” energy to do that, but instead it just dropped the periscope thingy with blue lights, that, for some reason, needed to drop down to start the particle accelerator, instead of just being down all the time, it’s not like they needed the space, again, the ship was huge. And also somehow, the ship had tons of energy for the rest of the movie. They could have just had “weird stuff happens on the ship” and still have had it been cohesive in some way.

People freaked out on Twitter over the ending, but you knew there were going to be giant creatures beginning with Donal Logue’s tv broadcast scene. Also, when husband looks out the window and sees explosions and hears fighter jets flying to the scene (yes, this could be the start of the “Oil Wars” mentioned previously, but not after Donal Logue). And again, when you see the shadow of the monster in the smoke over the debris. And again Again, in the bomb shelter (where was this? who built it? and how did a random doctor know its location? Was it on Yelp? Hey Siri, is there an abandoned bomb shelter and or bunker near me left unlocked with plenty of supplies that also has great cell reception?), when you heard giant foot steps above; what else could have made those exact sounds? And finally, when husband actually says, “You’re having her come back here [to Earth] to these THINGS,” right before you see the giant creature at the end.

Through the use of the Sheppard Gyro Compass device, The Cloverfield space station, intending on creating unlimited energy, accidentally sends the crew to an alternate dimension. The scifi aspects hold up, sort of, when weird things happen and continue to happen without explanation, in a similar vein to ‘Event Horizon.’ I believe ‘Cloverfield Paradox’ was trying to say that when the original Cloverfield ship of original Earth jumped to a new dimension, the universe was trying to correct itself, with anomalies, because the ship did not belong to this new dimension. This wasn’t explained very well, in fact nothing was explained very well. So much so, that instead of establishing rules for the Cloverfield Universe, that were desperately needed (& were promised in promotional marketing), this movie basically says, “we did some stuff and now we can do whatever we want for future films, because none of it matters.” If you want people to become fans, set up rules so we have something to grasp to. As far as I can tell, the particle accelerator opened a dimensional gateway and let out giant monsters in every dimension, at different times. I can only assume that now, ‘Cloverfield’ and ’10 Cloverfield Lane’ took place in alternate dimensions and all future movies will have no tie-ins to previous films, and if they do, and a future sequel is not popular, they can simply hit command Z and undo the previous plot, citing that happened in another dimension, and has no relevance on a continuous plot line. ‘The Cloverfield Paradox’ was originally called, ‘God Particle,’ after the Higgs-Boson particle discovered at the Cern particle accelerator. Scientists have claimed the Higgs-Boson can explain the universe. Maybe they, Paramount with JJ Abrams, originally named it “God Particle,” so they could play God with the plot and never be accountable for anything that doesn’t work.

Speaking of giant monsters.. In the original ‘Cloverfiled,’ many of the monsters were just larger than human size, 8-10 feet tall(?) With the giant, “end boss” monster, half the size of New York buildings, that somehow Michael Jordon-jumped up and knocked off the head of the Statue of Liberty. Why? Because it made a great movie poster. The monsters, at the end of ’10 Cloverfield Lane’ were similar to the ones in ‘Cloverfield,’ but more like aliens, with chemical weapons and the technology to build a mothership capable of invading other planets. OR, maybe the aliens driving the mother ship were creatures we haven’t seen yet, who traveled through the dimensional gateway and unleashed the creatures on Earth in every timeline (I’ll take a story credit for the next Cloverfield movie Paramount). When you finally see the giant Cloverfield monster, at the end of ‘Cloverfield Paradox,’ it is so huge, it’s head is above the cloud layer. That is way bigger than Godzilla, in fact, according to science, the cloud layer, as depicted in that scene, ranges anywhere from 6000 to 20,000 feet, and the clouds depicted in that scene, cirrus above cumulus, form at a minimum of 20,000 feet and usually much higher. The weight of such a creature would have easily crushed the underground bunker from the previous scene. 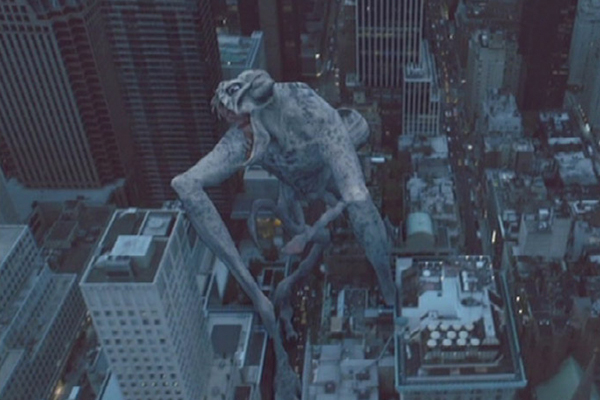 And in that same scene, did the giant Cloverfield monster eat the escape capsule, from Cloverfield space station, thus negating the entire struggle of every character, of the entire plot, of the entire movie? Maybe not, it was hard to tell, and maybe the creature missed the capsule and it was the same capsule that landed in that unexplained scene from the original ‘Cloverfield’ film, or maybe these two events happened in two different dimensions, and these scenes were just edited together, like Westworld timelines (which is another JJ Abrams project)? If the intention of this Paradox, a convoluted and unsupported plot line which was created merely to rub people the wrong way and get them to complain about this film online, generating enormous social media buzz, then, success.

This movie had a lot of potential. I love the actors, the acting, the incredible sets, the amazing cinematography, the flawless FX, but the story just had so many issues. I would have loved to have seen events in the future create events in the past, or something similar; just better scifi than the muddled story we were given.

Would I recommend ‘The Cloverfield Paradox’ and should you watch it? It’s better than many other movies currently on Netflix, and is even better than many films released in the theaters, despite everything I’ve just mentioned. Also, ‘The Cloverfield Paradox’ is better than anything currently on network television, so yes, I would recommend it, and yes, you should watch it (if you love scifi and don’t mind many, many unanswered questions, and major plot holes).